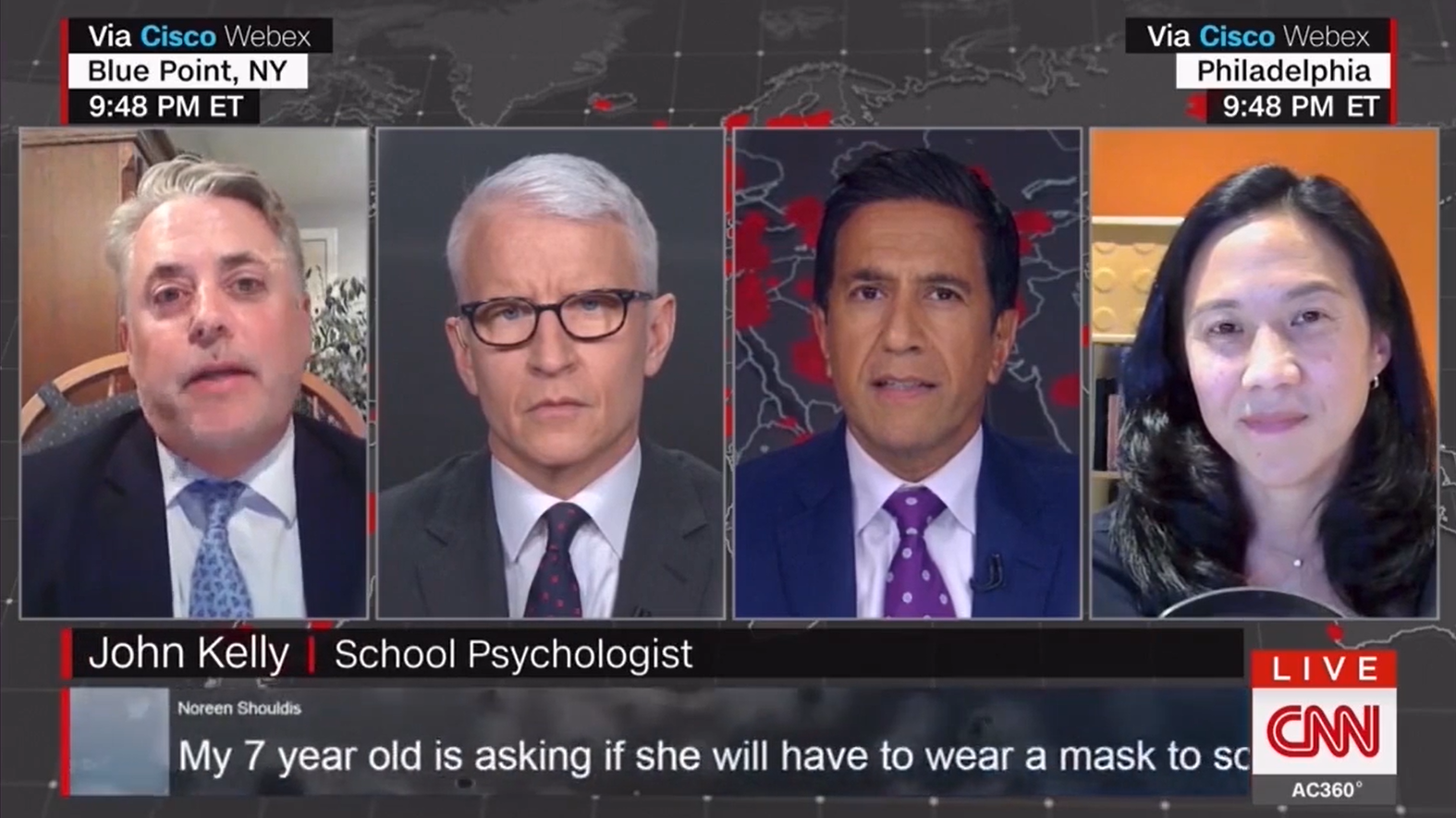 Dr. John Kelly, school psychologist and Past President of NASP, attended CNN’s global town hall, which featured a discussion about how to support students during the coronavirus crisis. CNN’s Anderson Cooper and Sanjay Gupta started off the discussion. “Kids in this country will eventually return to school, but for now they are still learning at home. So what health and psychological concerns are there for students, educators and parents alike? Joining us now, John Kelly. He’s a school psychologist here on Long Island, New York, and an adjunct professor at St. Johns University in the psychology program.” After introducing Dr. Kelly, they introduced Angela Duckworth, a psychology professor at the University of Pennsylvania and author of Grit, the Power of Passion and Perseverance.

Dr. Kelly responded with the following.

“It’s a really interesting scenario Sanjay because I think that what we know about crisis events is that quite honestly it affects kids in very different ways. There are multiple factors that come into play that really help to predict how one child might react versus another. So for the majority of kids, they will come through this and they will be okay. There may be some short-term issues that we need to help them through and kind of get them back on track. But we do know that there’s another subset of children and adolescents who maybe has some particular vulnerabilities, some challenges that they have been facing, and we’ll need to address those issues maybe a little bit longer term.”

CNN later took a question from one of their viewers, Ross V. Stoltz from Rome, NY.  “Do you think there will be a major regression with most children’s education and what they learned the first half of the school year?”

“There’s no doubt that there’s been a major disruption to kids’ education.” Dr. Kelly then referenced the guests that were interviewed right before him who had observed “the quick changes that our teachers have had to make.” Dr. Kelly stated, “Schools in general are set up to support children even when we are not physically together, and so anything that we can do now will help to mitigate the impact later on.” Dr. Kelly also emphasized the importance of “making sure we’re prepared to support students when we do reopen.”

Missed instruction over this extended period will likely have major impacts on student achievement.

As Dr. Kelly pointed out, this will be a “major disruption to kids’ education.” This is consistent with research from the NWEA, who researched the impact that summer vacation has had on student achievement. What they found is that “achievement typically slows or declines over the summer months, declines tend to be steeper for math than for reading, and the extent (proportionally) of loss increases in the upper grades. The degree to which students lose ground during the summer, however, can vary by data source, grade level, and subject. Some of the earliest work in seasonal learning suggested that summer slide leads to declines of two to three months of learning over summers, while other research using nationally representative data showed small declines (two weeks of learning), or sometimes even small gains, during the summers following kindergarten and first grade, which researchers described as summer slowdown.”

Projections as seen in the graphs below suggest major academic impacts from COVID-19 closures for students, especially in mathematics. Specifically, the graphs display an estimate of the average academic growth trajectory by grade for mathematics (Figure 1) and reading (Figure 2). “In a typical year (shown as solid lines), average academic growth varies across the academic year (shown as the curved lines seen in some grades) and generally declines from the last day of school through the summer, with steeper declines in mathematics than in reading. The dashed line shows projected trajectories under a COVID slowdown, and dotted lines show projected trajectories under a COVID slide. Preliminary COVID slide estimates suggest students will return in fall 2020 with roughly 70% of the learning gains in reading relative to a typical school year. However, in mathematics, students are likely to show much smaller learning gains, returning with less than 50% of the learning gains and in some grades, nearly a full year behind what we would observe in normal conditions.”

Teachers have done an outstanding job adapting to the technological demands of online learning. However, some students have limited or no access to internet or a laptop to participate in online learning. In addition, teachers undertook this responsibility with little to no training or guidance on best-practice methods. Overall, the COVID-19 crisis is a call to action for educators. Once schools are back in session, we must be prepared to support students, many of whom will be significantly behind academically.

We are likely facing a mental health epidemic.

While focusing on academic remediation is important, let us not forget that students’ mental health and well-being contributes substantially to their overall educational performance. As Dr. Kelly pointed out, “what we know about crisis events is that quite honestly it affects kids in very different ways. There are multiple factors that come into play that really help to predict how one child might react versus another.” One of the major factors influencing this is Socioeconomic Status (SES). We are seeing income inequality in America increase right before our eyes. This crisis has disproportionately affected low-income families, especially those who have lost their job and are unsure of how to pay their rent on time. Low-income families are experiencing increased rates of family instability, and the resulting stress is rubbing off on students. Nevertheless, when the very air we breathe causes anxiety, students from all demographics have the potential to be significantly affected and in need of mental health supports. Some students across the country have lost family members, and every student has struggled with the anxiety of potentially losing loved ones. As a result, there is a rising demand for mental health supports in schools.

District leaders must turn to school psychologists for guidance now more than ever.

It is well documented that students access mental health supports most often through schools. District leaders must consult with mental health professionals such as school psychologists, school counselors, and school social workers about how to best support students, teachers, and families when students return. These professionals have already found ways to supports students such as through virtual check-ins and counseling sessions. As Dr. Kelly stated, “anything that we can do now will help to mitigate the impact later on.” Overall, district leaders must not overlook the importance of addressing the mental health concerns of students. On a macro level, we can all play a part in advocating against anticipated budget cuts to education. With rising levels of need for mental health supports, schools need more funding, not less, to effectively address these mental health concerns.

Check out the full video of Dr. Kelly on CNN: